Gathered by the Spirit.  Renewed by the Word.

When lumbering ceased being ‘King’ in the Wilson area in the late 1880’s the men who had worked as woodsmen and sawyers in the forests and village bought farms and moved their families and belongings out into virgin cutover timberlands. Through hard labor they began the farms which exist today. They had not forgotten their Creator who had led them to this good land. So on the evening of March 31, 1889 ten men met with Rev. Nils Arveson, at the home of Louis Peterson to consider establishing a church and calling a pastor. A call was given to Rev. Nils Arveson, which he accepted. Services were to be conducted once each month at the homes, schoolhouses and Village hall in Wilson.

On October 9, 1894 the cemetery, which had been donated by Mr. Martin Christianson, was dedicated. Not until December of 1896 did plans for building a church actually materialize. The plot of land beside the cemetery, donated by Mr. Peter Brandvold, was chosen as the building site. Lumber was transported from Menomonie via a horse and sleigh, when a hauling bee was held in the winter of 1897. Building began as soon as winter permitted. By August 1, 1897 the annual meeting was held in the church. Most of the construction was done on a volunteer basis. The first altar was homemade, presented as a gift by the Spring Valley congregation.

In 1900 the bell was placed in the tower. The members of the congregation who built a bridge (The Hassel Bridge) raised money for the project. They received $211.59 for their work. The total cost of the bell, plus freight charges, was $243.36.

The first organ was donated as a gift from Mrs. Dan Davis. Inga Brandvold (Mrs. George Nelson) was the first organist. Our present organist is Mary Brandt.

During the early years of the congregation a choir was organized, with Mrs. Thomas Olson as its director. Later, Mr. Eilert Johnson became the choir director. Mr. Harold Hanson became the director in 1947. Following his tenure, Mr. Clarence Hillstead and Mrs. Delores (Babe) Jacobson served in that capacity. Mary Brandt is the current music leader.

In 1903 Peter F. Hanson plastered the church, donating his time and talents. On June 7, 1903, the church was dedicated. The first precenter (klocker) was Mr. Louis Peterson, who faithfully served for many years. In 1915 the basement of the church was built with funds raised by the Young Peoples Society.

In the early years of the congregation the women were not idle. With construction of the church basement in 1915 the women held suppers and bazaars to raise money to complete a kitchen. Their delicious Fall Supper and spring Pancake Supper continue today. Another notable accomplishment of the Ladies Aid took place in 1965 when funds were raised for indoor plumbing.

During the years 1947 – 1949 the building underwent a real facelift. A new hot air furnace was installed. Later the old windows were replaced by the stained glass we have now. An electric Hammond organ replaced the old organ.

In May 10, 1981 ground was broken for an addition on the west end of the church. It included a spacious narthex to allow easier access to worship and social gatherings. The cost of the project was $74,686. A dedication service was held at its completion on January 31, 1982. In preparation for the Centennial in 1989 the interior of the Sanctuary was redecorated. With the helping hands of the members and Bergelin Construction Company, our worship space was painted and wains coating of walnut trimmed the perimeter of the sanctuary. The altar, pulpit and baptismal font were also refinished to complete the $10,000 project.

In 2003, a wheelchair lift was installed and the narthex was enlarged to accommodate the lift. The restrooms were also made handicap accessible. This project started in May and was completed in September at a cost of $100,000. The architect was Architectural Design (Tim Peterson); the contractor was Master Builders (Rick Larrabee), both from Menomonie WI. The Building Committee was Sue Faber, Roxann Peterson, Lyle Jacobson and Roger Kronholm.

During the summer of 2008 thirteen evergreen trees were planted on the northeast side of the church in honor of Margaret (Oare) Hendrickson’s 90th birthday. The 13 trees represent Margaret’s parents and her siblings. All eleven children were confirmed members of Wilson Lutheran Church.

Though much has been said about our building and projects, our mission at Wilson Lutheran Church is to make disciples of Jesus Christ. We have been privileged to send two (2) sons of the congregation as ministers of the Gospel of Jesus Christ, Rev. Douglas Brandt (Ret.) and Rev. Rexford Brandt (Ret.) hey are the sons of the late Ralph and Lucille Brandt.

We are grateful to God for the 125 years of grace which He has lovingly given to us. Through the years His Word and Sacrament have nourished and strengthened His people through difficulties of life. With each successive generation new faith and spiritual life were instilled in our young people. Now as a congregation we recognize how indebted we are to our God who we worship. Apart from God we can do nothing, and yet with God all things are possible. 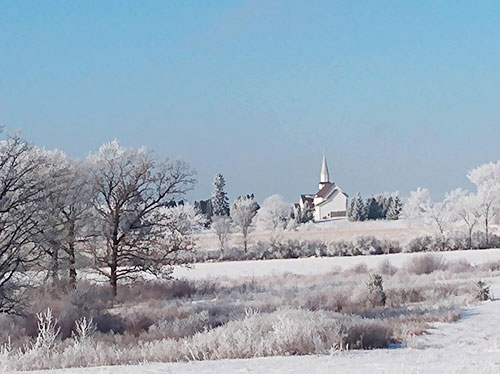 PASTORS OF OUR CONGREGATION 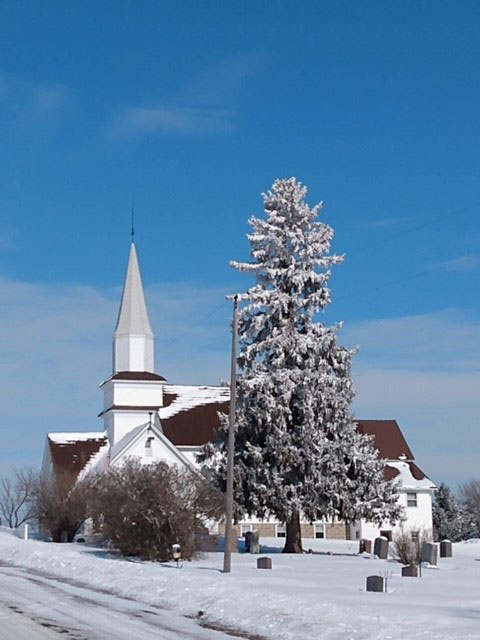